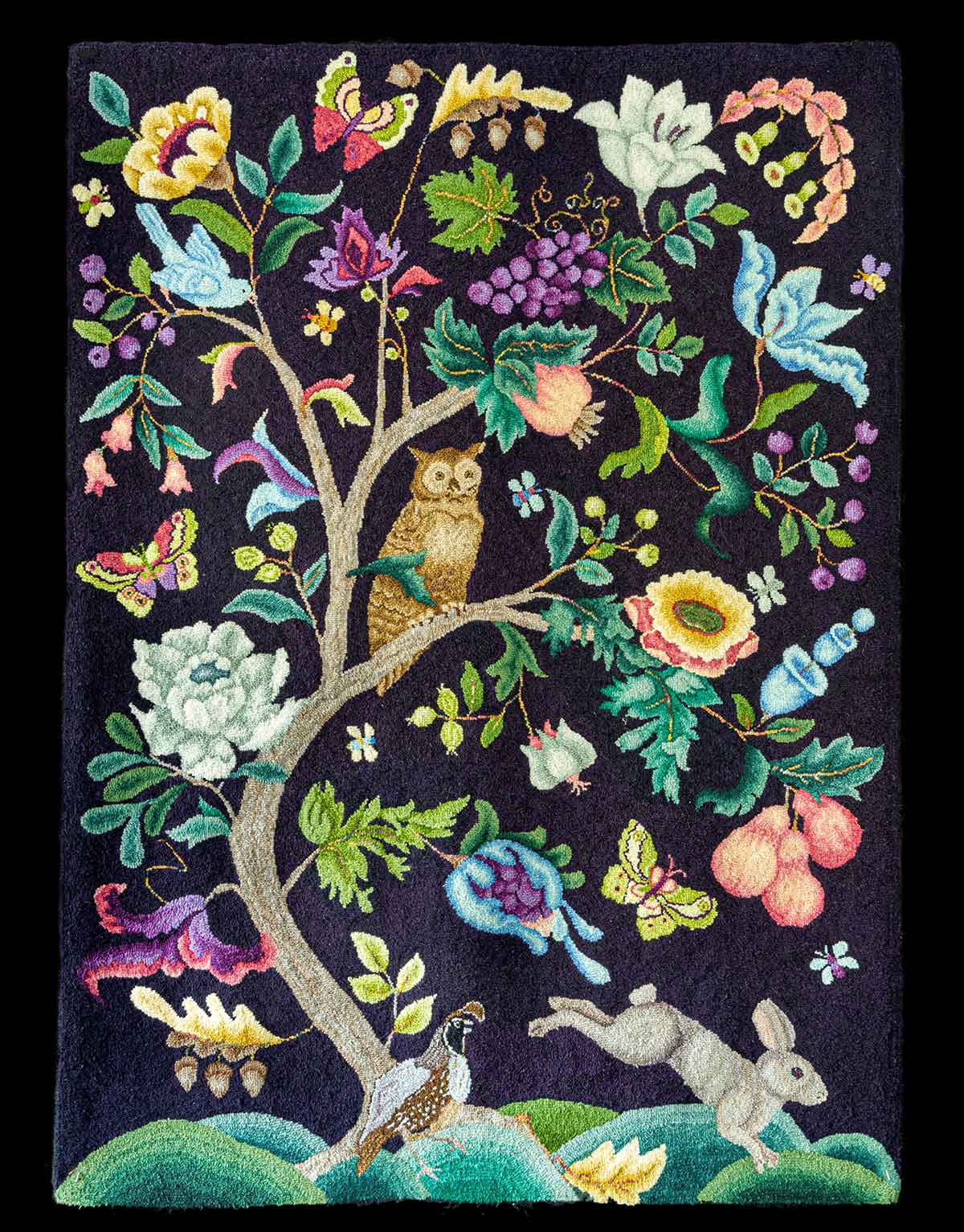 This was a fun design to hook because of its many motifs, all different. There was some wool specifically dyed for Marti’s Fantasy using formulas suggested by Nancy Blood, my teacher , but also used were swatches left from other projects or ones stashed away. Knew they would be used someday!

Marti, the designer, and I sat next to one another in Nancy Blood’s class at Green Mountain Rug Hooking School a few years back.  I was working on “Chirp”, a David Galchutt pattern, and she one of her own design.  I just loved her pattern and asked if it were available, which at the time was not.  Eventually Nancy Blood purchased the rights to the pattern and made it available printed on monk’s cloth.  I was excited to be able to hook Marti’s pattern which Nancy named, “Marti’s Fantasy”.  It was fun to see how Marti’s and my hookings showed different interpretations and how the same pattern can result in unique finished pieces.

In the early 1980’s, by chance I noticed a small sign, Rug Hooking, alongside the road I took to work in Manchester, CT. Curiosity drew me into a small shop, Fraser’s. Janette, the owner, gave me some basic instructions, and I left with a burlap backing, strings of wool, a hook and a hoop. I had found my craft! Back then, most folks started on a #3 cut and my first rug was a floral taught by Viverly Powers. Soon after, I moved to VT and was on my own to learn techniques, how to dye, etc. for back then teachers were far and few between. Rug camps were wonderful resources and, once again, there weren’t that many. For years I returned to the Green Mt. Rug School, located in Randolph Cr., VT at the technical school . There was also the Green Mt. Rug Hooking Guild. Classes were concurrent with the show when it was in the round barn in Shelbourne, VT. After marrying a soldier, once again I was on my own. Not much hooking in El Paso, TX, Bamberg, Germany or Elizabethtown, KY! In 2000 we returned to New England and I have had the opportunity to attend many camps, study with Annie Spring, Nancy Blood and others. My work has been honored in several Celebrations, country fairs and exhibits. I’ve enjoyed being a member of the Green Mountain Rug Hooking Guild, ATHA, the McGown Guild and since retirement, the Brattleboro Rug Social group.