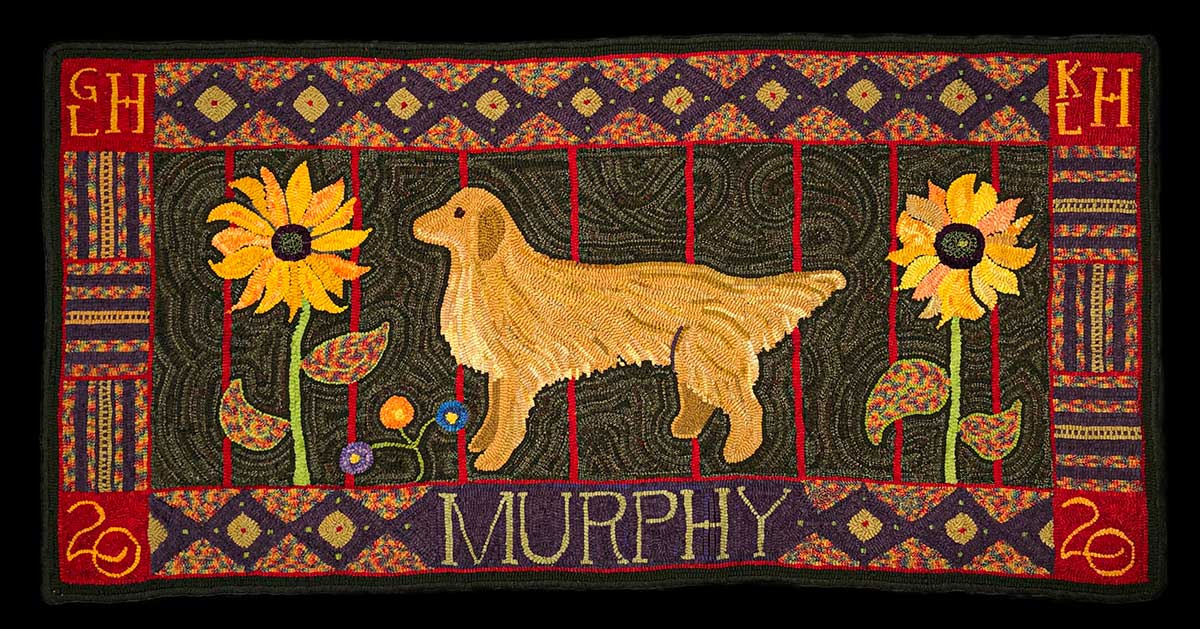 GALEN’S MURPHY is the 3rd rug of five I hope to make for my grandsons; the first was KAI’S JACK (Celebrations XXV), the second is LUCA’S COMPASS (in this show).

My dog Murphy was a magnificent golden retriever; he died when Galen, now a teenager, was only 6, but holds a very special place in Galen’s heart and I’ve always known that Murf would be the subject of Galen’s rug. The style of this rug is a little out of my wheelhouse, but I thought a contemporary version of a primitive animal portrait rug would be just right, and when I saw the Emma Lou pattern I knew I could adapt it. It was the right size & I liked the dog. I thought he looked a little goofy and that I could improve on his head, but when I redrew and hooked it, it was awful.

Lesson learned: if you’re going to hook a primitive, let it be. The rest of the pattern consisted of two sketchy willow trees and a simple border which I replaced with big surreal sunflowers and a border of my own design.

Aside from the dog there were no limitations on color. I love color and always include at least a bit of red in my rugs. Since I began hooking Murphy in mid-March, just as we all went into lockup, I made it a goal to complete it only out of my stash. This required choices I would probably not have otherwise made, especially for the background (there’s a lot of background!), but there are happy coincidences and in this case I’m surprisingly pleased with how it came out.

Lesson number two: don’t toss out some of those dull yards of textures in muddy colors that you bought as a new hooker — they’ll come in handy one day.

I’ve been hooking since 2002. I’ve always found it to be immensely relaxing and gratifying, but in 2020 it has saved my sanity. I think people would say that my rugs are generally characterized by a love of color and a penchant for symmetry which I am trying to relax.

I was inspired to begin hooking by a life-long love of textile arts, a fondness for antique rugs and a desire to find like minded folks in a new community. I was lucky to encounter a McGown Guild of welcoming women who taught me the basics and, although their style was not mine, the foundations they provided have kept me going happily for 18 years.

I feel inspired by every rug or mat I see in some way. My goal is always to make rugs that are distinctly contemporary but rest upon the traditions of the past. The hooking artists I’ve been admiring most recently are Anne Cox and Liz Alpert Fay, whose work is inspiringly original, imaginative, smart, abstract and beautiful.

I like to hook words into my rugs, and the time we are living in has compelled me to speak out. Most recently I’ve hooked NEVERTHELESS SHE PERSISTED and NO JUSTICE NO PEACE. I’m currently working on SAY THEIR NAMES, and noodling around with various ideas to commemorate lives lost to Covid.