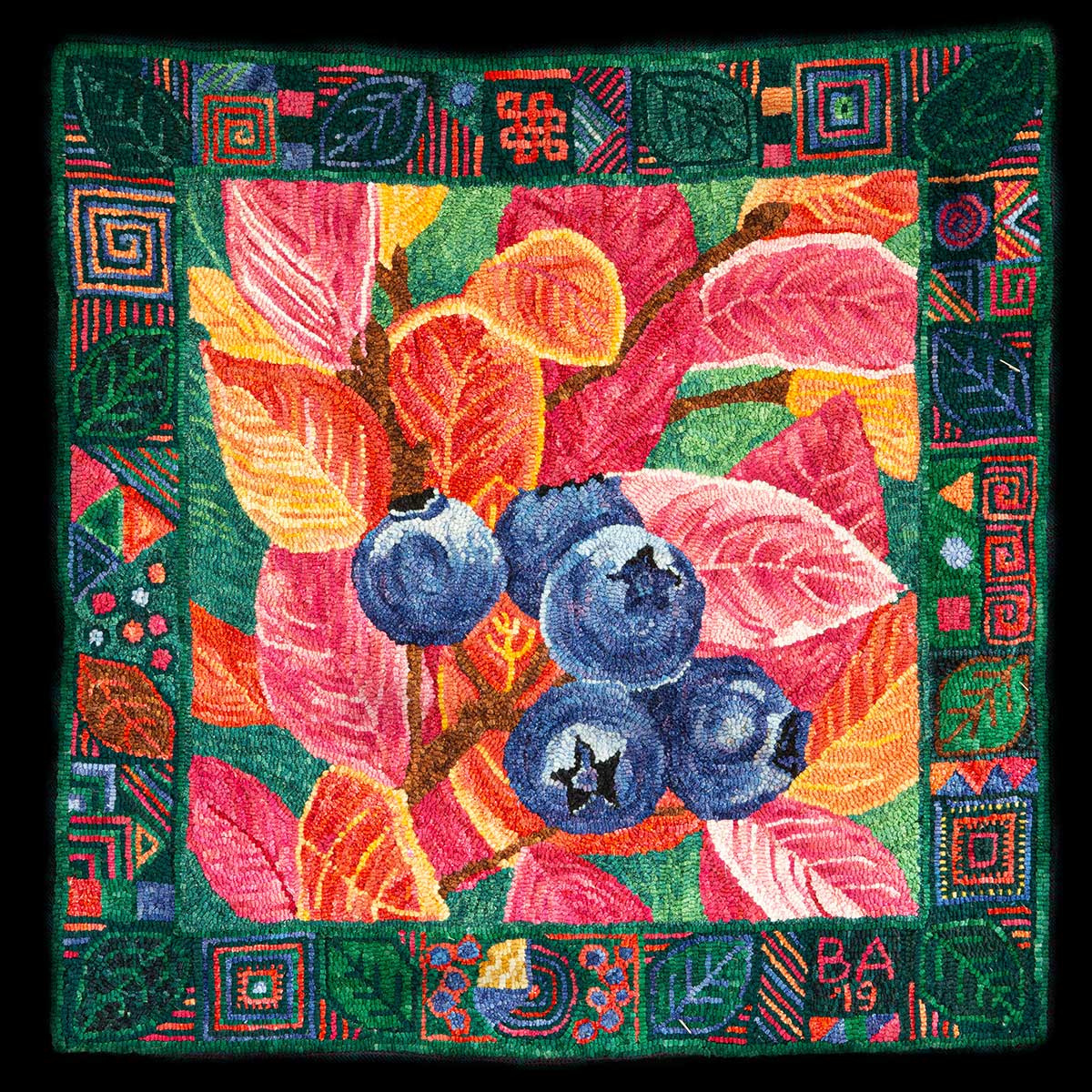 This kit appealed to me when I saw it at The Woolery in Frankfort, KY. But I don’t usually buy other people’s patterns, let alone kits. A month later, I won The Woolery’s door prize and knew just what to use the gift certificate for!

There was enough linen outside the design to add a border, and I had made 24″ square pillows for my grandsons, and thought this would make a good pillow, too. I had a lot of fun inventing the geometric blocks for the border, including a celtic knot and a blueberry pie!

We were traveling when I was working on the blueberries, and I just didn’t have the range of blues I wanted. I put some cut strips of the dark blues on a layer of white wool and “cooked” it briefly in the RV’s microwave – voila! some lighter shades were produced, both from the white wool “receiver” and the blue noodles that gave up some of their color.

I learned to sew and knit from my mother at a very young age, to spin and weave in my 20s, and then explored various other media: quilting, stained glass, fused glass and lamp-worked glass, watercolors, and then, on a trip to Nova Scotia circa 2008, decided I needed to try rug hooking.

My grandmother had made some hooked rugs my mother had in our house when I was a kid, though I never saw her do it. I do remember a huge iron frame in her basement, and guess that she probably used the old guitar-shaped tools for punching rather than hooking.

I made a few chair pads, cutting wool and wool-like scraps from my sewing left-overs. For some reason I had held on to the 3″ hem of a high-school wool skirt, removed when the dress code changed and we were allowed to wear our skirts a bit shorter! That went into the first chair pad!

I might have put away my hook after these experimental chair pads, but two things coincided to keep me at it. 1. My husband bought me a used Fraser Bliss cutter on ebay, and 2. I ran into Cherie Giddings and learned that there was an active group in Brattleboro, and that rug-hooking was a social thing!

I love that the tradition includes re-purposing old garments. I travel a lot with my touring musician husband, and we check out thrift stores all across the country. My stash of recycled wool is extensive, and I’m working to use it!

My 27 years in public education was followed by a second career in website development and when the guild needed some help with theirs, I stepped into the board’s “Communications” position. Summer – Fall 2020 has me building this show!